Heads up: Buying via our links may result in us getting a commission. Also, we take your privacy rights seriously. Head here to learn more.

There’s a bit of a hole in the men’s professional canvas briefcase market right now. Y’know, those bags that are made of hearty canvas (waxed or not) with good looking leather accents. They’re rugged but also professional enough for a nice office. Goldilocks in both style and substance. We’ve all seen them. The problem is that the pricing has gotten bifurcated. You’ve either got eyebrow-raisingly cheap bags that might make it a year or two (which is fine if that’s what you’re after,) or there’s the eye-wateringly expensive high end designer stuff.

The middle, which is so often the case, has been scattered to the style winds.

J. Crew appears to have abandoned their Abingdon. Boarding pass seems to have cancelled their Flight Brief. Filson’s USA made original briefcase now costs, wait for it, $450. 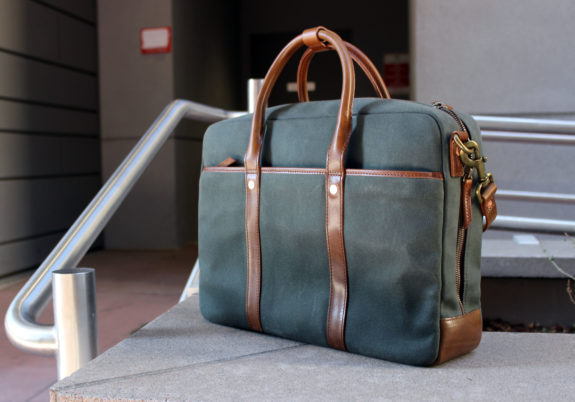 Which has seemingly nothing to do with the hall of famer. Not quite sure how they get away with the name. Anyway…

The materials are really something special. Green, British, 20 oz. waterproof waxed canvas which strikes the perfect balance between rigidity (it stands up just fine on its own) and flexibility. Japanese YKK #8 “Excella” Zippers look old school and operate with the definitive certainty you don’t find on modern, cheap zippers. Antique brass hardware looks like an heirloom out of the box and included dustbag, while looking anything but warn out. Italian vegetable tanned leather handles, accents, strap, extra luggage strap, and base are smooth, soft, and flexible. It’s really nice stuff, and the subtle variations and depth gives it a real expensive look. It’s a natural material that took time and energy to make (with extra apologies to the cow). It’s not something flat, fake, and engineered. 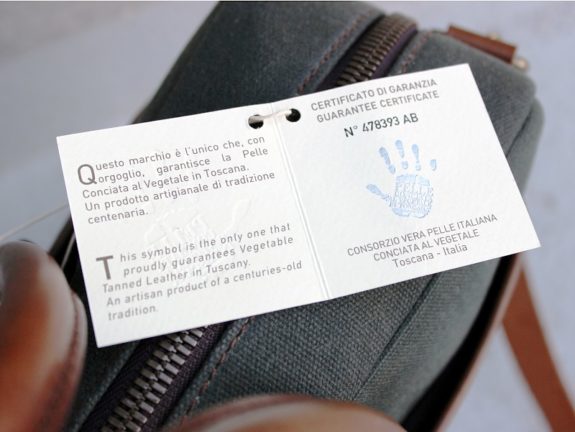 There’s a button-stud style keeper to wrangle the top grab handles together. It’s okay. A bit cumbersome to be honest. And probably could have done without it. But it does look good, and since this is a high grade of leather, it’ll loosen up and form to your hands over time.

Button stud keeper to collect the grab handles.
Handsome, although a bit stiff to start. Should become easier to use, with use.

The interior is lined in a super soft “tobacco suede” which is felt-y and uniform enough that you’d be forgiven for thinking that perhaps this stuff is actually “engineered.” Organization options inside are plentiful. Pockets, pockets, and more pockets. A padded center pocket for your laptop is the foundation, and it expands out from there with options for pens, your phone, business cards, and more. Impressive interior. Lots of organization options, while looking professional.
It doesn’t look or feel like some cheap cargo pants were sewn in as an afterthought.

But in person, it just doesn’t look like it does on their website. Specifically, it doesn’t look like it does in their in-studio shots, which for whatever reason makes it look noticeably more dressed-up. Glossier. Fancier. It’s still a handsome as heck, professional briefcase. It just leans a little less “high-rise,” and  a touch more rugged in person. Not a ton more rugged. A touch. A rugged touch. Like the Brawny paper towel man petting a kitten. Or something. 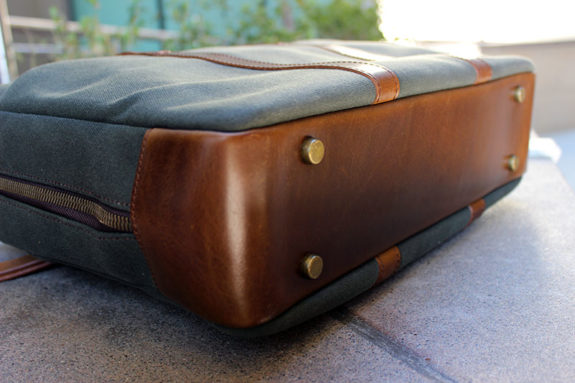 More Tuscan leather at the base. Brass feet.

There’s also no word on where it’s made. Maybe that doesn’t matter since it comes with a lifetime warranty, but it sure seems vague. Especially when they say things like “we call New York home,“ yet a paragraph later they speak of “experienced artisans, using time-honored construction techniques”… with no mention of where those actual artisans are. Again, does it MATTER? Probably not. But… yeah. It’s a really good bag. Perhaps not a transcendent hall of famer. I mean, all the S&P Aviator Briefcase has to do is look around in its own “division.” There it’ll see WP Standard’s all leather “The Woodward” at $348. There’s also Gustin’s USA Made Horween Chromexcel “Deluxe” at $349 (when it’s actually available for pre-order, since that’s how Gustin operates). That’s some stiff competition for the $368 Satchel and Page. And I think most would agree that price is hardly an advanced analytic.

But if you prefer waxed canvas over all-leather (and many do), and want something hearty, professional, and investment worthy that won’t force you to sell a kidney, then the Aviator from Satchel and Page is worth taking a swing at.